2020 is a big year for Lancashire-based Progress Housing Group as it celebrates 20 years since opening its women’s refuge service in South Ribble.

The major anniversary comes during the global pandemic, COVID-19; the impact of which has led to the national domestic abuse charity, Refuge, recording a significant spike in calls to its National Domestic Abuse Helpline, highlighting the need for refuge provision now more than ever.

South Ribble Women’s Refuge, or Clare House, as it is also known, has provided a safe haven to over 1000 women and their children since its launch in the year 2000. It was named after Pauline Clare, the first woman to hold the rank of Chief Constable.

In July 2015, the Group added to its refuge services when it took over the management of Chorley Women’s Refuge, which has accommodated a further 70 families.

Over the past 20 years, the Group’s refuge services have achieved many positive results to protect women and children from domestic abuse. These include:

• Supporting over 1000 women and their children at Clare House

• Supporting more than 500 women through a community resettlement service funded by the Ministry of Housing, Communities and Local Government’s Violence Against Women and Girls strategy

• Annually supporting the global 16 Days of Action and White Ribbon campaigns helping businesses raise awareness of, and pledge to take action against, violence against women

• Setting up and launching a new website and text service for the refuges in record time during the COVID-19 pandemic.

In 2019, Progress Housing Group joined a consortium of refuges across Lancashire led by Safenet, with funding from Lancashire County Council, which aims to extend refuge support to victims of domestic abuse across the county of Lancashire.

Jacqui De-Rose, Group Chief Executive of Progress Housing Group, said, “The 20th anniversary of our refuge services gives us the opportunity to reflect back on what we’ve achieved to support and protect people experiencing domestic abuse in our communities.

“We are incredibly proud of how many women and children we’ve supported since the year 2000, but the impact of the coronavirus pandemic has shown that there’s far more work to do.

"Working in partnership as part of the Lancashire Refuges consortium for the last year has enabled us to reach and protect many more women and children at risk and we continue to support national campaigns such as the White Ribbon and the Chartered Institute of Housing’s Make a Stand campaigns to end domestic abuse and violence.

“All of this would not have been possible without the dedication of our refuge staff. Their hard work has enabled us to achieve so much to help people escape domestic abuse.”

Liz Stanton, Refuge Manager at Progress Housing Group added, “We’ve come so far at South Ribble and Chorley refuges over the last 20 years and achieved so much to protect women and children fleeing domestic abuse.

“Sadly, domestic abuse shows no sign of disappearing from our communities anytime soon and while this is the case, our refuges will continue to provide the safe havens and support that women and children need.”

Liz continues, “During COVID-19 we’ve seen calls to our domestic abuse helpline more than double during April and May 2020, mirroring what we’re hearing from the National Domestic Abuse Helpline about increases in requests for help across the country. And we’re extremely proud to have reacted so quickly to put additional support in place, such as the deployment of our new website, to support the increase of women and children needing our help.

“It’s amazing to look back over the last 20 years to see how far we’ve come and what the refuges have achieved in the fight to protect women and children from harm.” 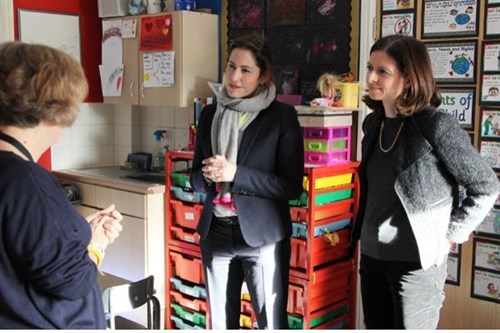 Images: Image above shows shows Liz Stanton, Manager of South Ribble Women’s Refuge speaking with MP Victoria Atkins, Minister for Women, and former MP for South Ribble, Seema Kennedy, during a visit by the MPs to the refuge in 2019.

Image below shows Pauline Clare, the first female officer in the country to hold the rank of Chief Constable, whom South Ribble Women’s Refuge is named after, and Progress Housing Group’s former Chief Executive, Russell Atkinson, standing with other officials back in the year 2000 at the official opening of Clare House. 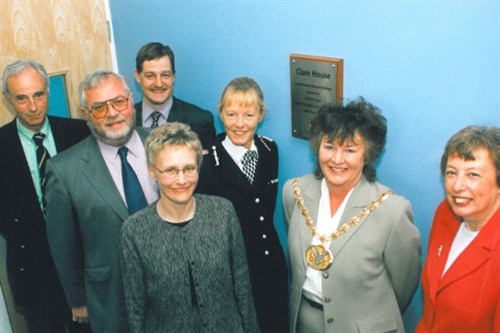 If you are concerned about someone who may be at risk of domestic abuse, phone the 24-hour South Ribble Domestic Abuse Helpline in confidence on 01772 435865, email clarehouse@progressgroup.org.uk, or visit the website at www.clarehouselancashire.org.uk (opens in new window).
The new text line service is now available on 07790971237 between 10 am and 4 pm Monday – Friday.