A few weeks ago, eight-year-old Grace and seven-year-old Emily had a brilliant idea to use their love of singing to raise money for a very important cause.

The two best friends had been practising their carol singing in the playground at school when they heard about the work of Derian House. Finding out that the local hospice helps children and young people, whose lives are too short, to make happy memories, inspired the schoolgirls to use their love of singing to raise money for the hospice this Christmas.

The girls have been carol singing around Euxton, Lancashire, knocking on people's doors, introducing themselves, and explaining how they are raising money to help families staying in Derian House over the Christmas period.

Of Grace and Emily's fundraising, Grace's mum Gabby says: "When the girls told us what they wanted to do for Derian House and asked us to take them out carol singing, we didn't know then that they would raise so much money for the charity! We originally set a target to raise £300, and we're now at £2,250 and rising!

"We are so proud of the girls for coming up with the idea all on their own. They've not only managed to spread a little joy and happiness in these difficult times, but most importantly, they've supported such a wonderful charity. We are all so, so grateful to our local community and to everyone who has donated.

"When Grace and Emily found out about the additional donation of £500 from Progress Housing Group, they jumped up and down with joy!"

Hearing about the girls achievement, Derian House has asked Grace and Emily and their proud mums to visit the hospice on Wednesday 23 December to present the donation to the charity and sing for them.

Sarah Proctor, Community Fundraiser at Derian House said: “Grace and Emily have done an amazing job carol singing, not only raising a terrific amount of money for Derian House but spreading festive cheer in their community at a time when people need it most. The girls have definitely earned their place on Santa’s nice list! This year has been a real struggle financially due to the cancellation of our traditional fundraising events so we are incredibly thankful to both Grace and Emily and also to Progress Housing for their extremely kind contribution.”

We are so excited to be visiting Derian House to give them this massive cheque! We've really enjoyed our carol-singing and making people smile, and we're really glad we've been able to help other children.

Robert Porter, Service Director of Operations at Progress Housing Group, who approved the donation to the girls' appeal for Derian House, said: "The Group is delighted to make this donation from our Charity Fund to support Derian House.

"What Grace and Emily have achieved by raising money with their carol singing is absolutely wonderful. How incredible that at such a young age, they not only come up with this brilliant fundraising idea all on their own, they also chose such a wonderful cause to benefit. I'm sure everyone who had the good fortune to open their front door and heard the girls' carol singing thoroughly enjoyed it.

"All of us at Progress Housing Group are extremely proud of Grace and Emily and what they have achieved to help children and young people staying in the hospice this Christmas." 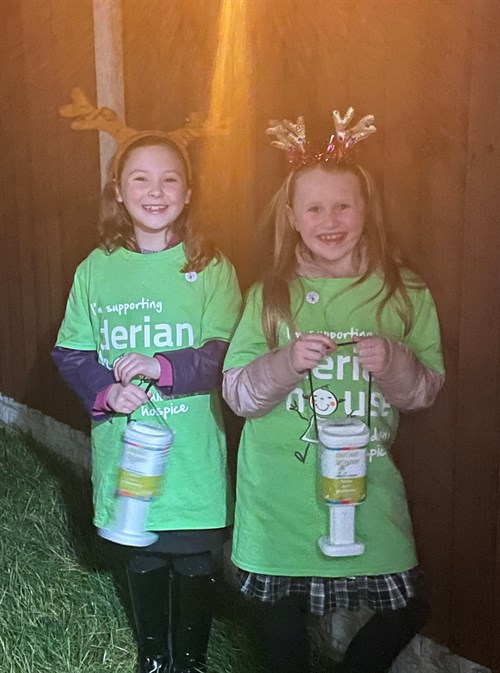