Progress Housing Group’s Chief Executive, Jacqui De-Rose, visited Shelter’s HQ in Manchester today to find out how money raised at a charity football match has contributed to helping people across the North West who are homeless, at risk of homelessness, or living in inadequate housing.

In the summer of 2018, Progress Housing Group challenged Manchester City Legends players to a football match at the Lancashire FA County Ground in Leyland, raising a huge £5,000 for UK homelessness charity Shelter.

The community event attracted a crowd of over 800 football fans and local families who gathered to watch Manchester City football stars including Asa Hartford, Peter Barnes, Michael Brown and Jeff and Jim Whitley play against a staff team from the social housing provider.

Captained by Peter Barnes, the Manchester City Legends put in a strong performance against Progress United, eventually winning 2-0, despite the social housing team putting in a fantastic effort against the ex-professional players. 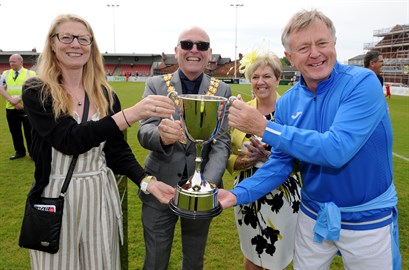 Local children were excited to be invited to be mascots and ball-boys and girls for the day, and supporters arriving early at the County Ground were lucky enough to take part in a ‘meet and greet’ with the Man City Legends players, and have their photos taken with the Carabao Cup and the Premier League Trophy, which had both been won by Manchester City that year.

Jacqui De-Rose (pictured holding the cup with Peter Barnes, above) said, “The charity football match with the Manchester City Legends was one of the biggest and most successful charitable events Progress Housing Group has organised and we were very proud to have raised such a notable amount for Shelter, a charity close to our hearts that helps get people into secure housing.

“It helped set the ball rolling for our 25 year anniversary celebrations which has seen staff at the Group raise over £30k for local and national charities in the last 12 months.

“It’s been wonderful to have the opportunity to visit Shelter to find out how the funds raised from the charity football match and donated by Progress Housing Group have been used to support people who are homeless, or facing homelessness.”

John Ryan, Hub Manager at Shelter, added, “It is so humbling when we see the activities and events that people host to raise money for us here at Shelter. We are a charity and simply would not be able to continue with our work without support like this.

“This is a huge amount of money and will go a long way to support the increasing number of people who are homeless, facing homelessness or living in bad housing. We hope that the people who took part and heard about this fantastic match will know more about our work and may support us, or may reach out to us should they ever need to.

“Thank you to Progress Housing Group and the Lancashire FA for helping us to defend the right to a safe home for everyone.”

For free and independent advice from Shelter visit: https://england.shelter.org.uk/get_help

Progress Housing Group are one of the largest providers of supported living accommodation for people living with a learning disability or autism in the country.

This year the 1 April, 2019, marked the Group’s 25 year anniversary, which saw the voluntary stock transfer of social housing in the North West and led to the creation of Progress Housing Group.

Progress Housing Group’s vision is to ‘have a positive impact on people and communities by providing high quality homes, supporting independence and creating opportunities’.

Shelter helps millions of people every year struggling with bad housing or homelessness through our advice, support and legal services. We campaign to make sure that, one day, no one will have to turn to us for help.