On 8 May 1945 (VE-Day) people across the country celebrated the end of the war in Europe in which many people had served and sacrificed for their country.

Our tenant, Ron, gives us his personal account of what VE Day felt like for his family and describes their experience of the VE Day celebrations in Preston on 8 May 1945...

Tuesday 8 May was a dry, dull, and rather mild day, but there was an air of excitement around the town. It was a day of mixed feelings for the people of Preston. My mother was still worried about my dad who, having fought the Germans at Dunkirk, was now fighting in Burma. With two small children to bring up, she was trying to put on a happy face. She heard Vera Lynn being played somewhere in the street. Later, Vera Lynn's music would bring back memories of working at British Home Stores when she would hear her songs being played all day long, and she would grow to hate her music. 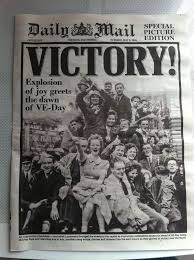 People gathered around their radios when it was announced that Winston Churchill was going to speak. He told the people that “A brief time of celebration would be allowed”. His speech was followed by refrains from Vera Lynn, the Glenn Millar Band and Tommy Handley.

Things began to move very quickly and some marvellous improvisation took place. Bunting was made from old material, paper etc and put up around the streets and lampposts to make a holiday scene.

Mothers had been collecting packets of blancmange and jelly for weeks and saving up all the dried egg powder and dried milk that they could.

Trestle tables were obtained from church halls, clubs and anywhere they could be found; chairs were begged stolen and borrowed from all the neighbours; table cloths were made from union jack flags, or taken from that special-time drawer.

The children did not realise the sacrifice the adults were making to put on the spread of food. It all seemed strange to them when they were told there would be a holiday for two days.

To set the party off, the children were encouraged to go in fancy dress. Lots of imagination and sewing skills from mothers and grandmothers were needed to turn old sheets and blankets into Arab costumes, fairy dresses, cowboy suits and knights in shining armour.

To start would be paste sandwiches (usually fish paste) followed by cakes made from carefully hoarded ingredients and of course the jelly and blancmange. Lemonade would be made from lemon powder mixed in big jugs. 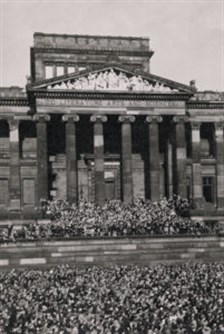 After the party, the preparations were made for the evening. First, the blackout curtains were taken down with great relief. Then wood and rubbish were gathered for a bonfire, as well as an effigy made of Hitler or one of his consorts.

In Preston people gathered on the Market Place next to the Harris Library. (Photos courtesy of Preston Digital Archives.)

At dusk, everyone gathered together, leaving their curtains open and letting the light flood out for the first time in over five years. 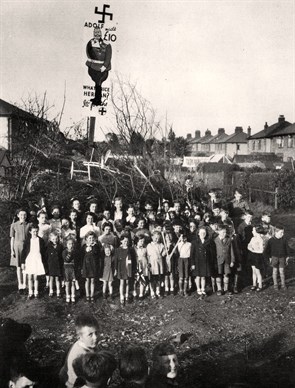 As the bonfires were lit, the sirens from the boats on the dock all went off simultaneously. Fireworks, which had been hidden away, were brought out. Most of the children had never seen fireworks and some, like my sister, were terrified of them (a fear she never got over).

Music was provided by people pushing their pianos out or bringing out their wind-up gramophones. The adults brought whatever alcoholic drink they had, and people danced the night away!

About the author: Progress Housing Group tenant, Ron Christopher, very kindly wrote the above article for the Group, based on his family memories and his own research. Ron lives in a Progress Housing Group independent living scheme near Preston, Lancashire. He is a member of Leyland Historical Society and Lancashire Family History and Heraldry Society, and frequently provides local history and memory talks.

Thank you so much Ron for telling your story!

Don't forget that you can also download activities and resources to use to celebrate VE Day at home from the National Memorial Arboretum from their website here.